What is the Green New Deal? 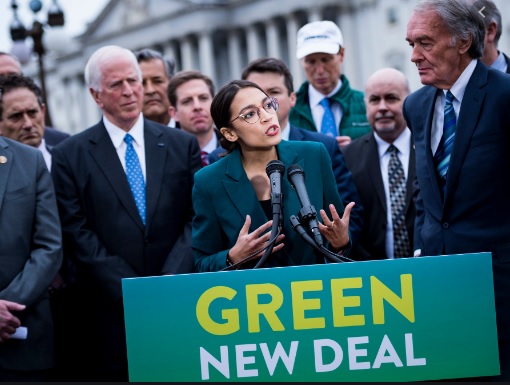 GenesisNewsWhat is the Green New Deal?

The Green New Deal (GND) is a proposed package of United States legislation that aims to address climate change and economic inequality. The name refers to the New Deal, a set of social and economic reforms and public works projects undertaken by President Franklin D. Roosevelt in response to the Great Depression. The Green New Deal combines Roosevelt’s economic approach with modern ideas such as renewable energy and resource efficiency.

In the 116th United States Congress, it is a pair of resolutions, House Resolution 109 and S. Res. 59, sponsored by Rep. Alexandria Ocasio-Cortez (D-NY) and Sen. Ed Markey (D-MA). On March 25, 2019, Markey’s resolution failed to advance in the U.S. Senate in a margin of 0–57, with most Senate Democrats voting “present” in protest of an early vote called by Republicans. Among the public, there is consistently high support among Democrats for the Green New Deal, whereas Republicans, in particular Fox News watchers, oppose the Green New Deal.

Since the early 2000s, and especially since 2018, other proposals for a “Green New Deal” have arisen both in the United States and internationally.