Alongside the G20, the F20 High-Level Forum took place in Buenos Aires with the title: “Shifting the trillions- Our contribution…

Alongside the G20, the F20 High-Level Forum took place in Buenos Aires with the title: “Shifting the trillions- Our contribution to a just transition”

Buenos Aires, September 6 2018- Alongside the G20, the F20 High-Level Forum took place in Buenos Aires with the title: “Shifting the trillions- Our contribution to a just transition” 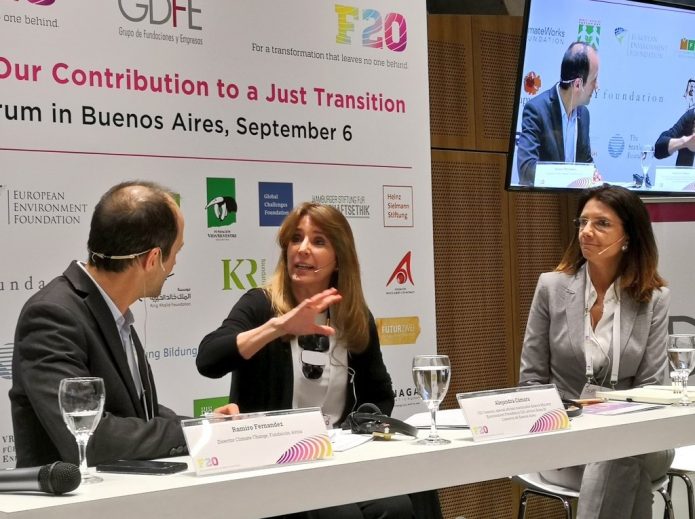 What is the F20 Platform?

The F20 platform consists of more than 45 foundations and philanthropic organizations from different parts of the world. By establishing the F20 platform the participating organisations seek for pathways towards sustainable development and call for common and transnational action based on positive transformation examples.

F20 wants to be part of the solution on climate change by building bridges between civil society, business and politics within the G20 countries and beyond.

How does F20 contribute to the solution of global challenges?

F20 seeks to establish an open dialogue to highlight solutions and positive transformation examples in order to move further forward with global decarbonisation trends. This also includes the identification of potential barriers to this transformation, as well as to motivate and include other actors to initiate progress and sustainable transformation processes.

Concerted efforts such as the F20 platform of foundations strive to send a strong signal to governments and make them realise that civil society and other non-state actors have a crucial role to play in implementing sustainable development. Global collaboration can facilitate efforts to overcome barriers and limitations. Particularly these efforts include:

We are convinced that only a new level of international collaboration and transformational partnerships will be able to solve the global challenges the world is facing today.

Alejandra Cámara, director of GENESIS, gave a webinar at ARPEL (Regional Association of Companies in the Oil, Gas and Biofuels Sector in Latin America and the Caribbean) on Green Bonds.

ARPEL has been working on climate change issues for 18 years, acting proactively with the main objective of helping its member companies reduce greenhouse gas emissions from their operations, maximize energy efficiency, and strengthen their capacity to adapt to impacts derived from climate change.

It is in this framework that one of the initiatives implemented by the Association is the series of Webinars on related topics within which the Webinar “Market of green bonds and the oil and gas industry” was successfully developed on August 8 and which was dictated by Alejandra Cámara.

Topics that were treated:

Introduction made by Marcos Mancini of UNEP Inquiry, who explained what Sustainable Financing represents for the international community, the advances that have been made regarding this issue and how green bonds may  help to transition to a lower carbon economy and more sustainable one.

Then Alejandra Cámara continued, as an adviser to the BCBA (Buenos Aires Stock Exchange), on issues of sustainable financing. She commented on the situation in Argentina with regard to green bonds. She also mentioned  different types of projects and how this financial instrument could be used to fulfill the commitments (NDCs) Argentina has made under the Paris Agreement.

Then followed Jaime Buritica, of the Colombian development bank Bancoldex, who described the experience of issuing a green bond for the first time. He told us about learning steps and  barriers they had to overcome. He also talked about the surprise they had in terms of fees, diversification of investors, etc.

The last to speak was Arturo Palacios from Carbon Trust, which is an English company that works (among other things) as a verifier of green bonds. He explained what is needed to pass a verification or a second opinion.

There were more than 80 participants: 55 were from Argentina and the rest from Uruguay, Colombia, Ecuador, Mexico, Costa Rica, Dominican Republic, England, USA etc.

The Latin American Carbon Forum was held at the Hilton Hotel in Mexico City October 18 to 20. The event, organized by the World Bank, Unep DTU, UN Environment, UNDP CAF, IETA, OLADE, IDB, UNFCCC and the Government of Mexico (Semarnat), brought together the main players in the industry to discuss progress of the Paris Agreement. Recall that the Paris Agreement was signed within the framework of the United Nations in December 2015 and it marked the first step to limit global temperature to 2 ° C putting a cap on greenhouse gas emissions .

For this event, the World Bank jointly with OLADE invited the BCBA to participate in a panel titled: Debt Instruments and Green bonds- A promise for Latin America. On behalf of the BCBA, Alejandra Cámara, as its advisor participated. The panel was shared with: Carlos Noriega, President of AMAFORE Pension Fund (Mexico), Jaime Buritica, Bancoldex Financial Director (Colombia), María Tapia, CII-BID Project Leader (Mexico) and Berit Lindholdt-Lauridsen, senior manager of Climate Finance at the IFC-World Bank (USA).

The session discussed  green bond market in Latin America, challenges, barriers and what is expected in the next 5 years.

The INNOVATE4CLIMATE event is a new version of what was the CARBON EXPO. Due to changes in the market, all Climate Finance issues have been integrated into an exhibition that was only dedicated to carbon markets. Today, the scope has broadened and this forum has discussed not only carbon markets but also several other emerging global financial instruments that help combat climate change.

On October 26 the event  “Municipalities addressing climate change” was held in the Auditorium Cinex.
In his speech, Mr.  Esc. Edwin Riva, Mayor of Monte Buey Córdoba, welcomed those present and after a brief review of the actions taken by the Municipality in the field of environment, appreciated the work of Ms. Olivia Antonio and Messrs. Gabriel Cottura and Nelson Romagnoli in organizing the event, inviting to continue working on this subject, and that it be translated into concrete actions against climate change.
The President of CREA Monte Buey – Inriville, Mr. Peter Bergmann, thanked the support of the firm AGROBUEY INPUTS SRL, and stressed the trajectory of the speakers who were invited.
In the dissertation, the following presentations were made:
– Climate Change: What, where we are, where should we go? What is the impact the agricultural sector? Finance and business opportunities, in charge of the Lic. Alejandra Cámara.
– Environment Project AACREA: What does and what can the Agro against Climate Change ?, by Eng Gabriel Vasquez Amabile..
– Municipal experiences on Climate Change. Red Argentina of Municipalities on Climate Change, headed by Ing. Ricardo Bertolino.

The event bring thousands of negotiators, world leaders, researchers, civil society leaders, business leaders, practitioners and policymakers in agriculture, forestry and development, funding organizations, and media, making it the largest, most influential event outside the UNFCCC COP. Forum participants will benefit from joining the interactive process of seeking combined solutions to the complex challenges common to everyone on the planet.

For second year, Alejandra Camara, had the opportunity to participate and exchange information with other participants.

The event was held at the Hilton Munich and attracted 500 guests who came from all over the world. Participants were selected by the Foundation understanding that all possess special characteristics that makes them responsible leaders.

GENESIS has been present throughout our director Alejandra Camara. It is the fourth time she is invited by this institution since August 2013.

Below, Alejandra Camara with Michael Schaefer, retired ambassador of Germany in China and Chairman of the Board of Directors of the Foundation. 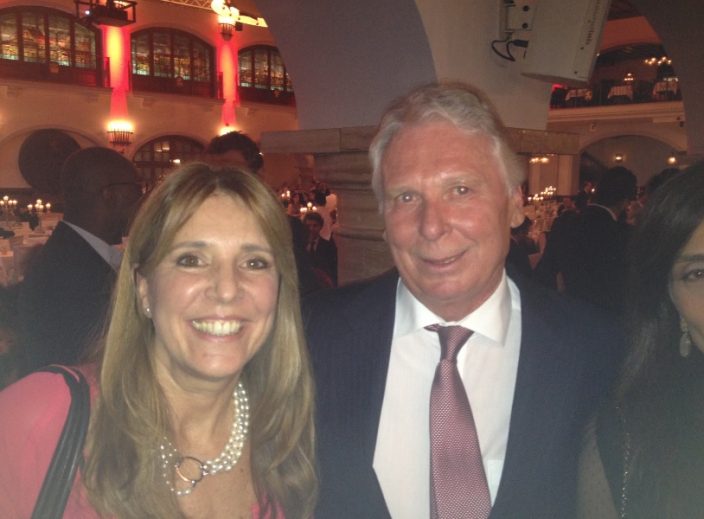 In the context of the forthcoming regulation of Law 27191 of Renewable Energy the 2016 Energy Roundtable, organized by the Institute of the Americas, was organized.

Sponsored by CAF, Fitch ratings, Engie, CADER and Energy Consulting Services this event was held at the Hilton Hotel in Buenos Aires on 9 and 10 March 2016.

Among the speakers was the US ambassador in Argentina, Noah Mamet, the Undersecretary of Renewable Energy, Sebastian Kind, the Secretary of Strategic Planning Energy, Daniel Redondo among others.

As part of the celebration of Women’s Day, Cecilia Luchia Puig, director of the known multimedia MAÑANA PROFESIONAL – LIDERES TV,  organized as every year a lunch with the participation of entrepreneurs, executives and public sector.

The colour note was given by the letter sent by Ms. Vice President of Argentina Gabriela Michetti, who unfortunately was traveling and could not attend as in previous years.

In the photo, Cecilia Luchia Puig (left) host to the event with Alejandra Cámara 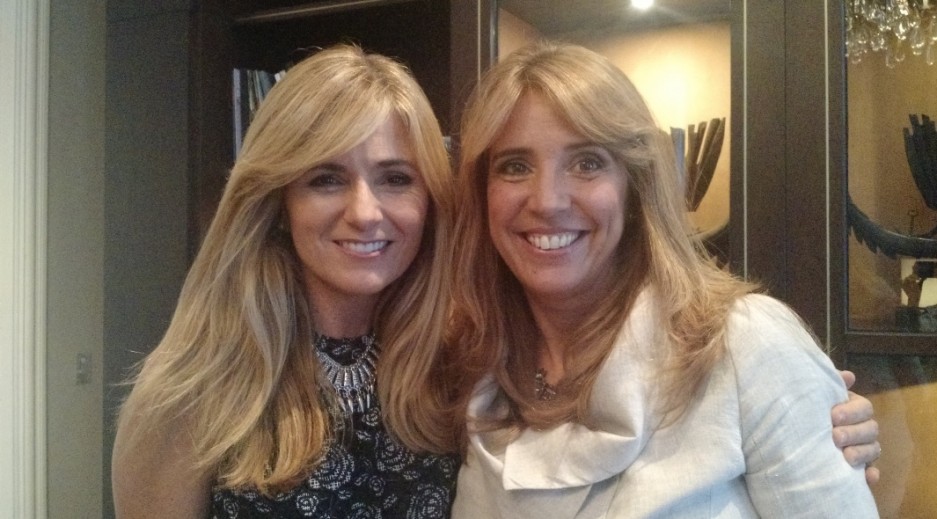 The ICBC Foundation,  invited Alejandra Cámara, director of Génesis, to give a lecture at EXPO AGRO 2016. The conference was held in the orange auditorium on March 9 at 14 pm.

The conference was about climate change, results of COP 21 in Paris, the impact of climate change on the agricultural sector and financial mechanisms.

The conference was open to all participants and had numerous journalists who at the end interviewed the speaker.

As part of an invitation from CREA (Regional Consortium of Agricultural Experimentation), Alejandra Camara, director of Genesis, gave a lecture in Las Rosas, Prov. Santa Fe.

The lecture was on climate change and the agriculture sector. It was held at the city  library  with the presence of numerous producers, representatives of universities, schools and other institutions of the region. 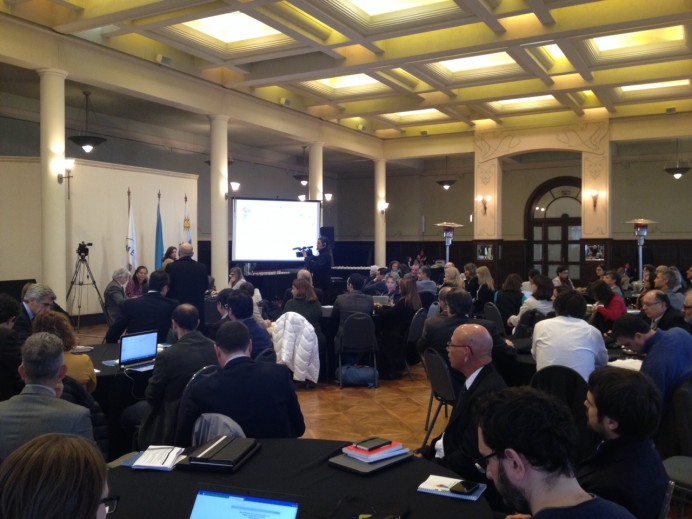 The event sought to create a space for reflection and analysis on the relationship between science and policy and integration of climate issues in decision making processes of public and private decision-makers in the region. To this end, a platform was presented to generate and consolidate relationships and cooperation experience between academia, government, civil society and private sector.

Alejandra Camara,  participated in the panel: “Challenges and mechanisms to integrate climate change in decision-making processes of the private sector.” 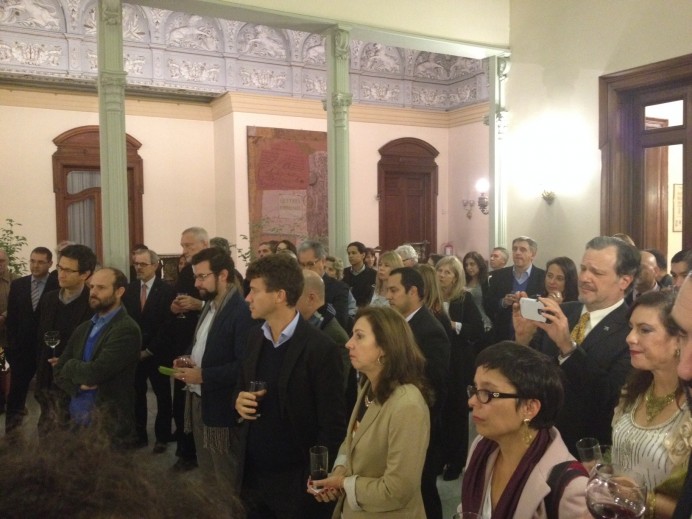 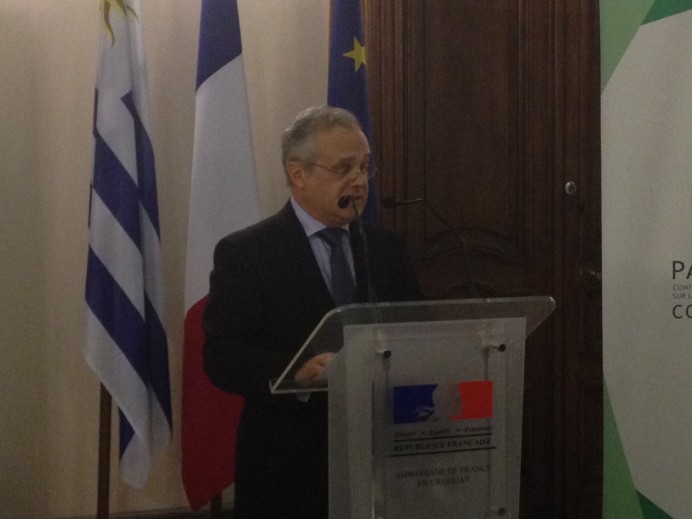 On the evening of August 19th, a reception was held at the French Embassy where the French Ambassador to Uruguay presented the country’s progress regarding the forthcoming international meeting on Climate Change (COP 21) to be held in Paris in December this year.